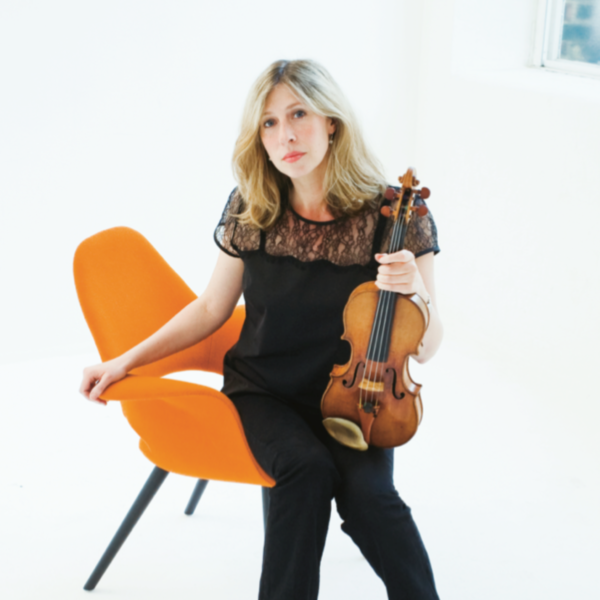 Clio Gould enjoys variety in her career as a violinist and performs as soloist, chamber musician, director and concertmaster internationally and at home in the UK.

She has held major and longstanding positions as Concertmaster of the Royal Philharmonic Orchestra , Principal Violin of the London Sinfonietta and Artistic Director of Scottish Ensemble, directing from the violin.

Clio has appeared as concerto soloist with most of the UK’s leading orchestras covering a wide-ranging repertoire. Known as one of Britain’s foremost interpreters of contemporary violin music, recent highlights include performances at the Royal Festival Hall of Pierre Boulez’s epic work for solo violin and live electronics, Anthèmes 2 , and performances in Sweden of Oliver Knussen Violin Concerto with the Royal Stockholm Philharmonic, alongside directing and chamber concerts in New Zealand and Japan and at the Aldeburgh Festival .

The Knussen concerto is a work with which she feels a deep connection , and she has been very fortunate to give many performances of it with the late composer conducting in Finland, Sweden, Japan, Hungary and at the UK premiere with the BBC Symphony Orchestra at the Aldeburgh Festival. She is the leader of the recently formed Knussen Chamber Orchestra which gave its inaugural performances at the Aldeburgh Festival and at the BBC Proms this summer.

Clio is honoured to play the Rutson Stradivarius of 1694 which has been generously loaned to her by the Royal Academy of Music. She teaches there and directs the Sainsbury Royal Academy Soloists. She has been awarded Honorary Membership of the Academy.