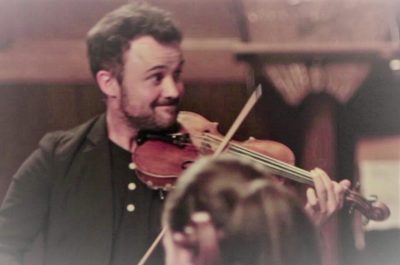 Donald was brought up in the small village of Roybridge in the Highlands of Scotland. When not running around the hills or climbing he could be found playing music of all sorts and it quickly became his life’s passion.

He grew up immersed in traditional music as his father was a Gaelic singer and teacher. He sang songs from when he could speak and loved attending courses at Sabhal Mor Ostaig and attending the National Mod and Feisan nan Gaidheal. Mostly he just loved playing WITH people.

He found himself at St Mary’s Music School and the Royal Northern College of Music and had a brilliant time at both. It was on his first day at the RNCM that the Elias Quartet began life, of which he has been a member ever since and with them travelled the world.

In 2009 Donald gathered some of his most favourite people and musicians to record his solo album “The Way Home’.

There is nothing more that Donald loves than collaborating. The more diverse the better… from playing and writing string arrangements for the lovely Kate Rusby, featuring on Catriona Mckay’s futuristic folk album “Starfish” to free improv on “Late Junction” with Trish Clowes – he loves it all.  A highlight of 2015 was leading the GRIT orchestra at the opening night of Celtic Connections.

In Whittington Music Festival’s 2018 “Fantasia on a British theme”, Donald memorably led the Elias Quartet in a three-quarter-hour set of his own Scottish folk songs. Just a month later, he wowed Wigmore Hall with the Friends he brings with him in 2020 to Whittington’s Folklassical:

plus the Maxwell Quartet and our resident musicians.