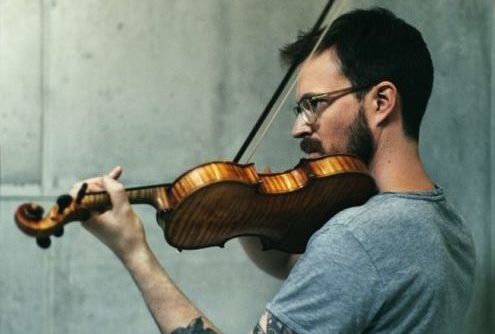 Swiss conductor and violinist Manuel Oswald is the ideal example of a true 21st century classical musician: an artist who combines creative curiosity with his numerous artistic skills.

A prolific chamber musician and artistic co-director of the MOMU Chamber Music Festival, recent highlights include a tour of China with the Stradivari Quartet, performances with the Camerata Variabile in Switzerland and Croatia, collaborations with multipercussionist Pierre Favre, Bach specialist Rudolf Lutz, as well as directing the second edition of MOMU to critical acclaim.

From 2004 to 2014, he was the 2nd violinist of the esteemed Gémeaux Quartet. With the quartet he was a prizewinner at major international competitions such as the ARD Competition in Munich, the Joseph Haydn Competition in Vienna, and the Franz Schubert Competition in Graz. And between 2014 and 2016, he was a member of the Merel Quartet Zurich.

Manuel Oswald regularly performs in prestigious venues such as the Berlin Philharmonie, Wigmore Hall in London, the KKL in Lucerne, to name a few. He has also amassed an impressive discography, and records for renowned labels such as RCA Red Seal, cpo, Genuin, among others. A passionate pedagogue, Oswald has worked as visiting professor for chamber music at the Lucerne University of Applied Arts, at the Academy of Music Basel and at the Folkwang Music University of Essen.

Manuel Oswald studied the violin with Gyula Stuller, Sebastian Hamann and Rainer Schmidt, chamber music with Walter Levin and the Hagen Quartet, and influential mentors include Eberhard Feltz and Sir András Schiff. Since 2015, he has been studying orchestral conducting with Christof Brunner and Iwan Wassilevski at the Zurich University of the Arts.