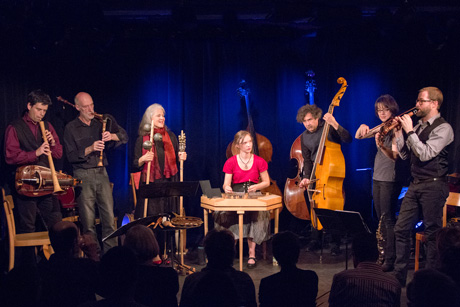 For many years Tritonus has been researching Swiss folk music and instruments in use up to 1800. They are constantly on the look out for original and alternative material as a counterbalance to mainstream Swiss folk music.

Their 1991 standard work ‹TRITONUS – Alte Volksmusik in der Schweiz› won the ORG (Eastern Swiss Radio and Television) Award and the CD is still on sale today. The group has continued through the years to perform in various formations both in Switzerland and abroad.

Together since December 2003, the members of Tritonus are Felicia Kraft (vocals, percussion, rebec), Urs Klauser (swiss bagpipes, cittern, 6-holed fife), Daniel Som (hurdy-gurdy, shawm, flutes) and Lea Zanola (hammered dulcimer, Jew’s harp).
The idea for a new CD arose as we collected more and more material. To follow up our historical and academic first album we wanted to tread new ground with ‹Alpan›.
Together with young jazz musicians Reto Suhner (saxophone) and Tobias Preisig (violin), Andreas Cincera (violone, double bass) and Markus Maggiori (percussion) we have created a new programme that combines the past and future of our folk music.

Having pieced together original instrumentations, we can now demonstrate early musical styles, melodies, texts and instruments and mix them with new sounds to show possible future directions.
The majority of the tracks on this CD are unpublished works that have not been previously recorded.
Music from Appenzell features strongly, although we’ve omitted the popular and well documented string music of the 19th and 20th centuries.
The music of the Swedish bands of Ale Möller and Lena Willemark (CDs ‹Nordan›, ‹Agram› etc : www.frifot.se) has influenced our ideas greatly.
In recognition of their work we named our CD ‹Alpan›. Later we discovered that our supposed fictional name ‹Alpan› – made up from ‹Alpstein› (pre-alpine mountain massif in the Eastern Swiss Limestone Alps) and ‹Nordan› – turns out to be the name of an Etruscan goddess of love and the underworld.